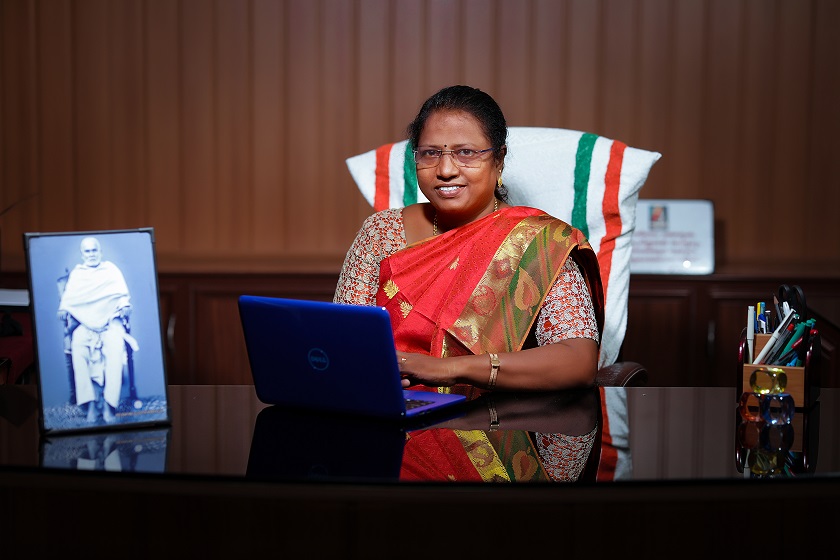 Sree Narayana College, Kollam, is an institution of remarkable repute in the higher education sector of Kerala, India. A firm adherence on democratic values and a strong footage upon the philosophic ideals of Sree Narayana Guru, had in fact won the college much fame in the annals of historic past and as well as in the present. The college had witnessed and propelled several revolutionary uprisals, and no wonder, the student community to this day cherish it an ideal dream to pursue studies in this historic campus. The popular rendition amongst the public goes that, a student passing out of the portals of SNC would have imbibed the capability to confidently sail by herself /himself towards a successful life. This is largely facilitated owing to the fact that the college is an ideal creative and intellectual hub, especially for those hailing from the socially under privileged, by letting them cultivate and nourish ideals and values required for a successful life. In short, the college is academically, intellectually and artistically vibrant, thus offering a unique, yet memorable experience to the student community.

The college was founded by Sri. R. Sankar, a visionary with sharp societal concerns. Hailing from a family which offered remarkable contributions to the freedom struggle of India, he had imbibed the reformatory ideals of Mahatma Gandhi, Jawaharlal Nehru and Maulana Azad; and hence, wanted to establish an institution of repute in the higher education sector at Kollam. Sri. R Sankar, showed great affinity towards the preaching’s and philosophical ideals of Sree Narayana Guru and especially at Guru’s seminal ideal “Attain freedom through education”. This indeed proved to be the propelling ideology for Sri R. Sankar, who envisioned and conceptualized this great institution. The college is currently under the able stewardship of the present Manager of Sree Narayana colleges, Sri. Vellappally Natesan. Over the years the college had produced many students and teachers of commendable calibre. Renowned poet and recipient of Jnanapeeth Award, Sri. O.N.V. Kurup, is an alumnus of the college, and had famously mentioned that “Sree Narayana College has played a decisive role in making my life and what it has become.” The college can boast of a long array of exceptional teachers as part of its vibrant intellectual history, which includes Sri. A.K. Ramanujan (famed poet and translator), Sri. Puthusseri Ramachandran (famed poet and scholar of Dravidian linguistics), Sri. Shakespeare Velayudhan (literary scholar), Sri. Kalidasan Chandrasekharan, Sri. Mathew Tharakan, Dr. P.C. Alexander (I.A.S), Dr. M. Sreenivasan (former Principal of SN College and renowned educationist), Sri. K.P. Appan (famed poet, critic & theorist), Sri. Nithyachaithanyayati (renowned poet & philosopher), Sri. M. K. Sanoo (literati & critic), Dr. M. Sundaresan, etc., whose fame had transcended the academic and intellectual boundaries of the college. Among the illustrious alumni of the college are famous cultural figures such as Sri. O. Madhavan (theatre director & actor), Sri. V. Sambasivan (musical artist & orator), Sri. Paris Viswanathan (painter & film maker), Sri. Thilakan (film & stage actor) and Sri. Mukesh (film actor) and leading political figures such as Sri. M. A. Baby, Sri. G. Sudhakaran, Sri. Adoor Prakash, Sri. Rajmohan Unnithan and Smt. Mercy kuttyamma, and famed personalities from the sports arena such as Sri. Ranjith Maheswari (Oly.) and Sri. P.R.Rajesh (Oly.).

Sree Narayana College, Kollam stands as a beacon of enlightenment held towards the students, welcoming them to a bright world of knowledge and yet at the same time be conscious of individual freedom, critical thoughts, liberty and above all a social commitment. Having served the society and shaped the societal milieu and temperament for more than half a century, the college is viewed with much respect and adoration, especially by the inhabitants of Kollam and neighbouring districts. It is indeed a matter of great pride to state the fact that more than half the student population of the college, is constituted of women students. The college is currently offering eighteen Under Graduate programmes, fourteen Post Graduate programmes and nine departments are approved research centres under the University of Kerala. The last decades of educational ventures by SNC had witnessed the addition of such innovative Undergraduate programmes such as B.Sc Physics with Computer Application, B.Sc BioTechnology, B.A Mass Communication & Journalism and B.A Malayalam & English Double Main. Keeping apace with the educational rhythms of the contemporary age, the college had initiated twenty-eight certificate courses, much of which are UGC approved. The college had kept up to its glorious past with recent innovations and requirements in higher education sector and had qualified itself with the NAAC ‘A’ Grade (2016) and ARIIA ‘A’ Band ranking (2020), besides being enlisted and assisted with various governmental initiatives and schemes such as RUSA, DST-FIST and DBT- Star Scheme. The college is keeping up to its spirits and is striving its best to impart value-based education.